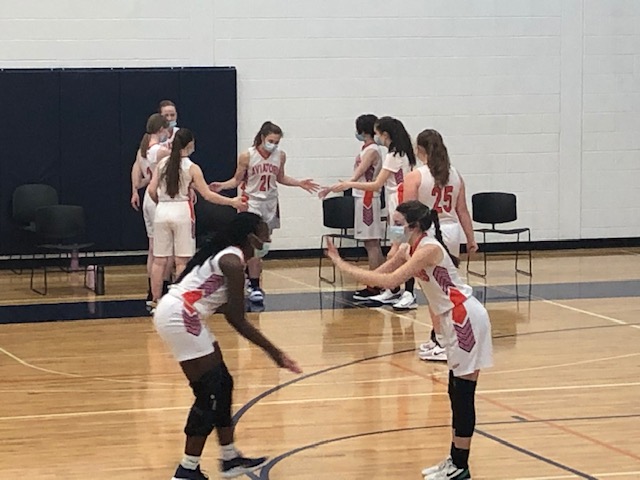 The West Michigan Aviation Academy girls basketball team dialed it in from long range on Wednesday night with a program best performance that lifted the Aviators over Wellspring Prep 50-44.

The victory lifts WMAA to 2-2 overall and a perfect 2-0 in the Alliance League.

The Aviators poured in seven 3-pointers in the victory. Sierra Greer and Audrey Mileski both knocked down three 3-pointers apiece. Mileski added two field goals and a couple successful free throws to finish the game as WMAA’s leading scorer with 16. Greer was not far behind with 14 points, all of her points coming either behind the 3-point or free throw line.

Bre Holmlund added the other 3-pointer for WMAA on her way to five points.

Grace McConnon finished her night with eight points for the Aviators, but her presence in the post made arguably a bigger impact on the game. The senior forward pulled down 13 boards in the victory.

Fellow post player Ava Bazuin had a couple buckets and a perfect 3-for-3 performance from the free throw line to finish with seven points, all coming in a crucial fourth quarter.

Despite the strong shooting performance, the game was far from in WMAA’s control, especially late in the contest. The Aviators took a 24-17 lead into halftime but the Wolves erased it in the third quarter and claimed a 7-point lead on WMAA in the fourth quarter.

The Aviators clawed back into the contest with seven fourth quarter points from both Greer and Bazuin to close out the win.

Alliance League standout Lillian Jackson had a big game for the Wolves, finishing with a game-high 24 points, including three 3-pointers and a 5-for-5 performance from the free throw line.

The win was the latest in back-and-forth battle between Wellspring and WMAA. Two years ago, the Aviators won the conference match-up in a close game at home. Last year, the Wolves returned the favor with a 3-pointer in the closing seconds to win.

Both teams will lock up two more times before the season is over.