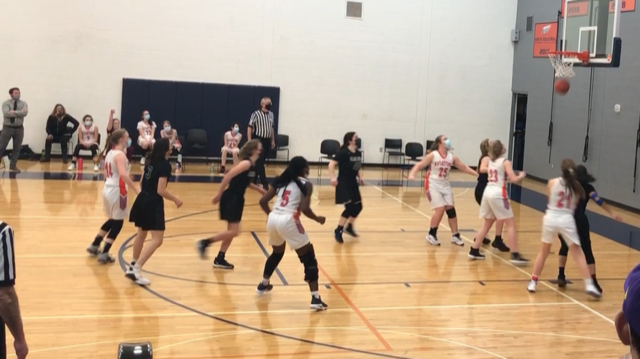 The two Alliance League teams competed on Friday night at WMAA in non-conference play and will still face each other again in two weeks for a league match-up.

Both offenses struggled to get started in the game, the Aviators (8-3) claiming a 7-4 lead after the first quarter of play and expanding that to a 17-7 advantage at the break. Through well-rounded scoring, WMAA was able to build on that lead the rest of the way to win comfortably.

Audrey Mileski was high scorer for the Aviators, finishing with 16 points. She connected on three 3-pointers, as did Bre Holmlund, who finished her night with 11 points. Mileski also chased down eight boards in the win.

Grace McConnon recorded another strong night inside the paint for the Aviators with 10 points and six rebounds while Ava Bazuin had two points and a team-high 12 rebounds.

Sierra Greer battled foul trouble in the second half, finishing with a single 3-pointer on the night for three points to go with three assists and three steals.

WMAA will travel to face Calhoun Christian (6-3) on Tuesday evening, looking to avenge a season-opening 25-17 loss to the Cougars.