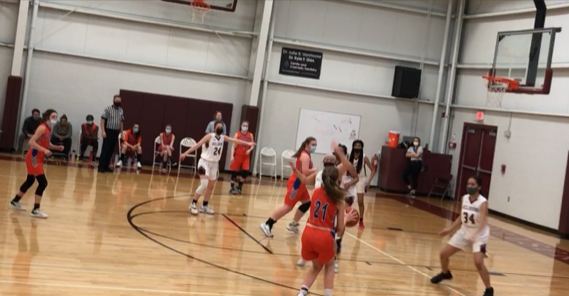 For the second straight game, Bre Holmlund led the West Michigan Aviation Academy girls basketball team in scoring as the Aviators prevailed in yet another closely-contested game with Wellspring Prep.

Thursday marked the third time that the two teams locked up this season and both teams have developed a competitive, yet friendly, rivalry with one another.

While the Aviators claimed wins in all three games, every game was decided by six points or less, including Thursday’s 37-36 win.

Holmlund finished with 11 points, including three 3-pointers. She was the only Aviator with double-digit scoring.

The Aviators (9-4) trailed the entire game. However, with 2:20 left in the contest, Sierra Greer drove the lane for a floater to give WMAA a 33-31 lead. With 47 seconds left, Ava Bazuin snatched an offensive rebound and put it back to extend the lead to 35-31.

However, with nine seconds left, the Wolves cut into the lead with a bucket. Leading 35-33, Greer went to the line and knocked down a couple with 8 seconds left to give WMAA a 37-33 advantage.

WMAA was able to turn the Wolves (8-6) over on the ensuing possession but Bazuin was quickly fouled. She went to the line and missed both tries giving Wellspring one final trip down the floor, where Lillian Jackson hit a half-court shot to bring the Wolves within a point.

Audrey Mileski had nine points for WMAA in the victory while Greer finished with eight points and a couple of assists.

Freshman Abigail Toonder also dropped in a bucket, the first field goal of her career.